A Specific Product to Map Land Cover on Reunion Island

In Reunion Island, within the framework of the GABiR project (Agricultural Management of Biomasses on the scale of Reunion Island), we needed exhaustive and up-to-date information on agricultural land use at the level of the whole territory. In this context, we decided to test the prototype Moringa chain on Reunion Island to assess whether it could meet the needs for information on land use. This tool, developed within the framework of Theia Land Cover Scientific Expertise Center (SEC), uses functions from the Orfeo Tool Box (OTB), controlled by python scripts. To function, a very high spatial resolution image (Spot6/7 or Pleiades) and a DTM, a terrain database and a time series (Sentinel-2 and Landsat-8) constitute the minimum requirement.

The reference database was built using existing products (DAAF land use database, Registre Parcellaire Graphique and BD Topo distributed by the IGN) but also in collaboration with partners and users of the final maps: Syndicat du Sucre de la Réunion, DEAL, ONF, researchers from the Université de la Réunion and CIRAD (UMRs SELMET, PVBMT, HORTSYS and UPR AIDA). This database has been expanded over the course of these collaborations in order to be as exhaustive as possible and to produce maps that meet the needs of a wide range of users (> Read the focus on uses by Pascal Degenne in the framework of the GABiR project, and by Béatrice Moppert on savannas).

Despite the difficulties related to the size of the data, we tested the feasibility of producing land-use maps from a segmentation based on Pleiades images acquired by the Cnes in the framework of the Kalideos project Three Applications Within the GABiR Project 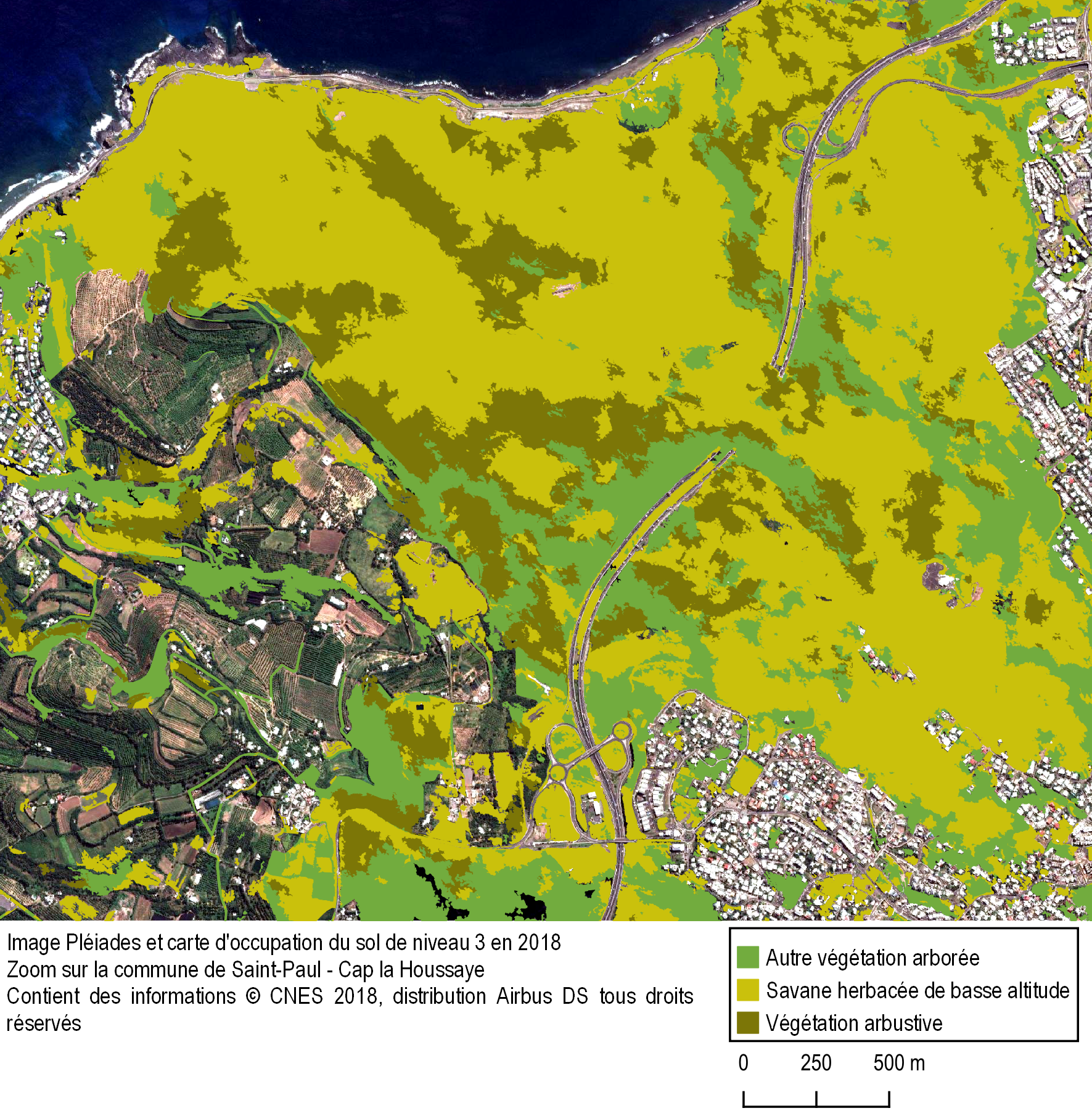 Mapping the savannas of the Leeward Coast

The research program «Les savanes de la côte sous le vent à La Réunion» – Savannas of the Reunion Leeward Coast – is conducting an interdisciplinary and experimental approach to the knowledge and management of coastal environments. It is based on past and current work carried out for the Conservatoire du littoral in Reunion Island and proposes a historical approach to environments and landscapes in order to establish alternative practices in terms of environmental conservation and management.

A tool adapted to the study of the landscape

At the interface between the various components of this project and involving researchers from various disciplines, a mapping component aims to clarify the land use dynamics in the lower western zone and, more specifically, to reveal the expansion processes of shrub species in herbaceous environments. The land-cover map produced by Stéphane Dupuy is the best existing working base to date. Since 2018, the map has included new learning classes that make it possible to distinguish three savanna formations: herbaceous, shrubby and woody.

Within the framework of the Western Savannah project, it is thus possible to distinguish, on the one hand, savanna areas in relation to other modes of land use (built, cultural, other natural areas) and, on the other hand, three categories of landscape facies within the savanna areas themselves. These typologies will have to be specified through field work envisaged within the framework of the research program on the Reunion savannas.

“Together, Simplifying the Spatial”